Well, sometimes you go a long time without making a personal best or personal record (PR). Sometimes you even go backwards, and it is a lonely dark place to reflect and look back at all your hard work just to see your numbers flailing. That is what is so tough about the sport of Olympic Weightlifting. It is not always a linear progression. I was very happy to finally make 2 competition PR's in the snatch-131kg, and 135kg. The 135kg was an all time snatch PR without straps. I did 136 with straps weighing around 96kg's in training during the spring of 2012.  I also made a competition clean and jerk PR as a 94kg lifter with 165kg. Last year at Provincials I made a 300kg total as a 105kg lifter weighing 98.5kg. But this year I did it at as a 94kg lifter weighing 93.3kg. A 300kg total is a huge milestone for me, and was one of my first serious goals when I started lifting. With a 343.35 Sinclair I was only 2 points off the best male lifter, Lucas Parker

My mind was focused on this meat for weeks. Focusing on my training lifts as if I was on the platform. I knew it would be a dogfight for gold with Geoff Yee lifting as a 94kg lifter as well. When it came time for warm ups, I did not want to look or talk to anyone. I was on a mission. I was focused. I attacked the weights and owned them in my mind. I only slightly doubted myself once and that was on the last clean and jerk attempt. That single moment of doubt snuck in and killed my lift. Next time I will not let that happen. Anyways, at this point I had a 10kg lead for gold but Geoffrey Yee had 1 attempt left. After a missed attempt of 165, followed by an iffy 165, he made a gutsy call and went for gold with a 175kg clean and jerk....And of course he had to make it.

Here are Geoff's lifts, he was not having a great day so you can only imagine the amount of mental toughness it took to make that 10kg jump and make the 175kg clean and jerk to win gold:
I was very mad that I lost on bodyweight as Geoff tied my total but I could not help but admire his courage. Competition brings the best out in people.
Official Results.

Posted by Mountain Man at 2:37 PM No comments:

On Saturday December 14th(Tomorrow) I will be competing at the BC provincial championships in Surrey. I will be competing in the 94kg category. I have tapering and preparing for this meet and hope to put up some new competition PR's. I am down to 93.6KG's right now. I have had massage, chiro, and I am mentally prepared.
http://www.bcweightlifting.ca/ai1ec_event/2013-b-c-provincial-championships/?instance_id=81
Posted by Mountain Man at 8:39 PM No comments:

Email ThisBlogThis!Share to TwitterShare to FacebookShare to Pinterest
Labels: Competitions

1- You've done a lot of sports: wrestling and strongman for example. What inspired you to try Olympic weightlifting? I always loved lifting since I was in 6th grade when I started tagging along with my older brother. I used to steal his pre-workout supplements because I thought they'd make me big like him, haha! He could bench 300+ as like a freshman or soph in high school so he was a monster. MY only goals were to beat his #'s growing up. That was it. So after wrestling went into strongman because of the late Jesse Marunde. Did that for 3.5 years, then was sick of weighing 300lbs and made the drop. I didn't have intentions of doing weightlifting when losing the weight. I just started to feel more athletic so I tried out weightlifting! 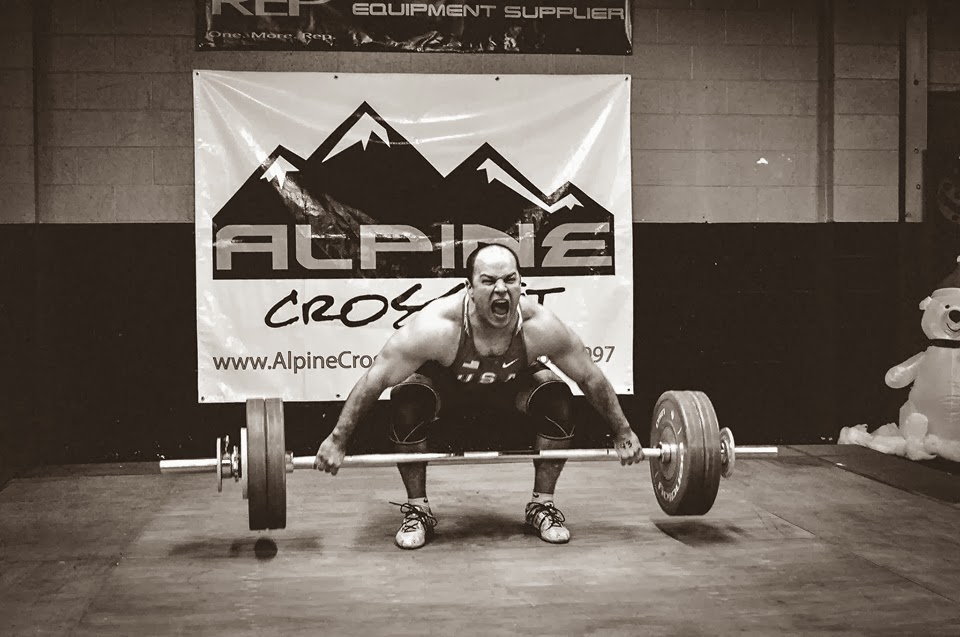 2- What keeps you going? I've wasted a ton of time in weightlifting. Being unfocused, selfish, and hard headed. What keeps me going is to reach my potential and to actually lift the biggest weights I am capable of. I'm sick of holding myself back.

3- You have trained at a lot of different clubs. Broz, OTC, and Cal strength. What place is your favourite in terms of atmosphere and philosophy? Can I even answer this question without making a bunch of people mad? Ha. OTC was my favourite. Zygmunt Smalcerz is the greatest coach in the world IMO. But, I did love being at Broz's a lot, and also learned a TON from the athletes at Cal Strength. In terms of an overall experience the OTC was life changing. But I really learned a ton from each gym. At the time I didn't learn it because I was too busy blaming others for my failures. Now, I'm in a position where when I reflect I've learned all the lessons.

4- Must have supplement? HMB! And Creatine from Top Secret Nutrition. It(HMB) really just helps in my recovery. I feel like I am much fresher for each workout when I take it. The most important thing is your dosage. They have charts on their website to make sure you take the right amount for your bodyweight.

7- Favourite thing about garage lifting? You figure it out yourself. You learn to love your own company & work things out in your mind. Both in terms of lifting and in life.

8- Diet philosophy? Eat to perform! Eat everything. Carbs, protein, and fats. Nothing is meant to be 100% avoided.

9- What manufactures PRs? Willpower & consistency. Listen to your coach. Keep your head down. Stop reading and start doing. Believe in yourself.

10- What is the Longest you went without a PR? 14 months...and been in the sport less than 4 years. Still stuck with it though.

12 - Proudest accomplishments in weightlifting? Nothing I feel proud of yet. Ask me next year :)

These collars do the job but are a bit harder to fasten and take off than the convenient Muscle Clamps. They are cheaper and more prone to product failure. Below is a picture of a cracked Rogue collar: 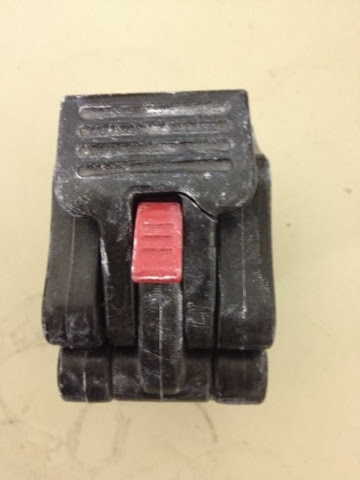 Here below is another broken lock jaw collar: 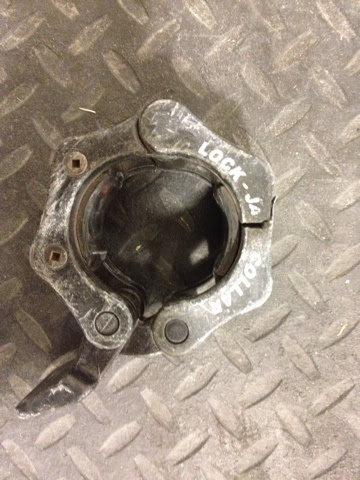 The muscle driver ones have served me well for years....However, muscle driver is no longer in business. Perhaps Rogue have upped their quality? Or maybe browse Bells of Steel to find a good weightlifting collar.
Posted by Mountain Man at 4:05 PM No comments: 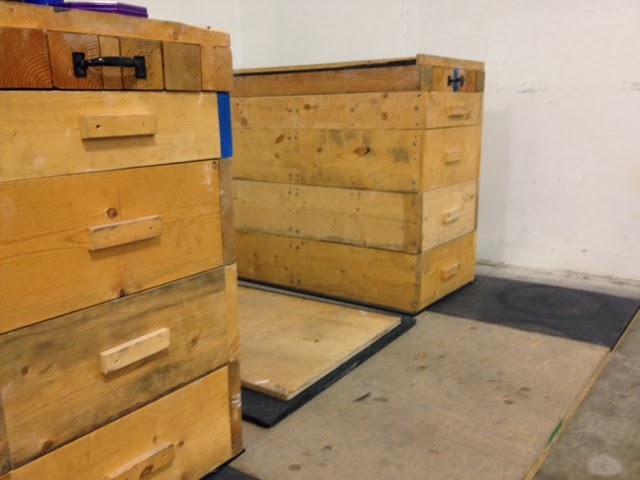 Thank you Greg for the detailed instructions on the jerk block building tutorial. I love these jerk blocks. You can customize the height you want by using different size blocks or removing blocks. You can also use these blocks for doing pulls or the lifts from knee height by just using the top 2 layers. They are not cheap though, there is about $350 worth of material and a full days labour invested in these blocks. The main boxes are light to move around and stack but the top layer of 4x4's are kinda heavy. 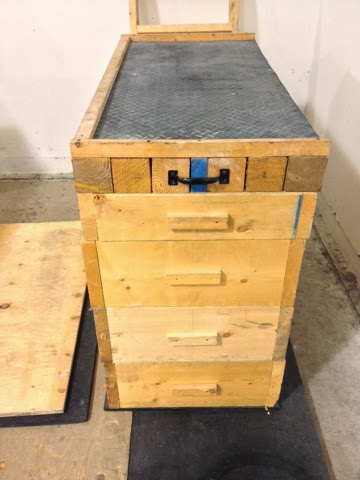 I don't have an issue moving them around but if you don't quite have mountain man strength yet (haha), you might need a partner to help move the top layer. You used to be able to access the plans here:
http://www.catalystathletics.com/
But, now it looks like you need to be a member of the site for said access. Here is another site that has jerk block plans: http://www.eng.auburn.edu/~simonrl/wl/jerkboxes/
Here are some videos of my using the above jerk blocks for different lifts in my training:

For discounted weightlifting equipment, check out Bells of steel.

Posted by Mountain Man at 3:28 PM No comments: The bumper plate rack from Pendlay is solid. You can move it around loaded although it is heavy. My only complaint is that they could have made it fit the change plates better. I don't know what the manufacturer had in mind for spacing but it is not specifically designed for different plate widths. You can see the 25's are snug but the 10's have room for more. This unit is pricey but it is solid. Check out weightlifting equipment for a decent price.
Posted by Mountain Man at 2:05 PM No comments:

How to Build a Basic Platform 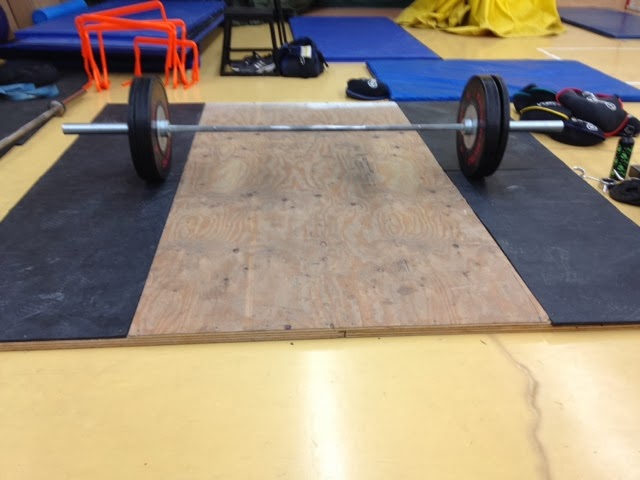 1-Lay 2- pieces of 3/4" plywood sidewise.
2-Screw the 1/2" plywood in the center on top of the 3/4" plywood.
3-you now will have a space along the sides for the 1/2" rubber mat. Install the mat by cutting it to size. Make sure the screws are not where the weights will land.
Note: if using a junior or female bar you will need to make the center plywood 3' wide and the rubber mats 30" wide on the side.
Looking for weightlifting equipment? Check out Bells of steel.
Posted by Mountain Man at 1:56 PM No comments:

I have always liked Jared Enderton because he seems like a self starting, do it yourself, down to earth guy. I have followed his weightlifting career ever since he became public at California Strength. He has been an accomplished wrestler, aspiring strongman (over 300lbs @5'6") and now a journeyman weightlifter with PR's around the 150/180KG mark. When I heard he was on Weightlifting Talk I listened to the podcast. He talks about:

-Garage training (I know about this).
-Olympic hopefuls (to tell you the  truth, I had no idea what this meant).
-Coming back from injury (have this in common too).
-Training at Average Broz Gym during the USADA raid.
-Training at the Olympic Training Center.

Check out the podcast:
http://www.spreaker.com/user/weightlifting_talk/jared-enderton 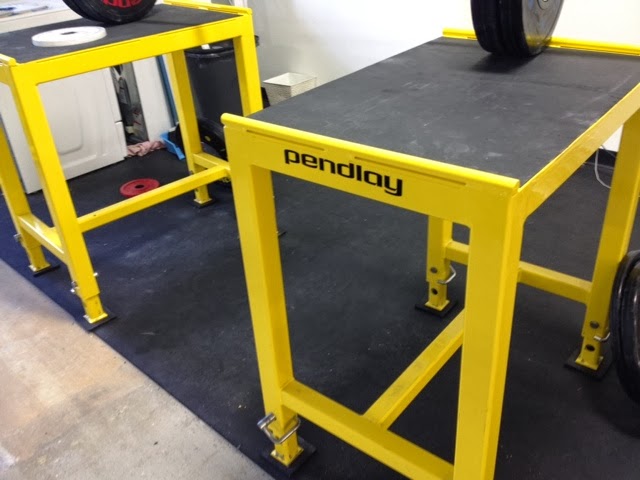 Good idea, quality components, but they are very heavy and cumbersome. It takes 2-3 people to adjust them. They are freaking LOUD when the weights drop on them, and the adjustable pins fall out sometimes when dropping weight on them. They bounce around a bit when dropping weights on them and it is hard to reposition the tables because of the weight. I know I must seem like a loser being a weightlifter and complaining about how heavy something is but I joke with my friends saying "I can only move things that are attached to a barbell." I also use some home made jerk blocks built out of wood, that are stackable blocks. Funny enough, the wood ones cost me as much to build (materials&labour) as you can buy these ones for from Pendlay. Although I like the weight, adjustability, and sound better on the wood ones; I do think the Pendlay Elite Jerk Blocks would be more durable. Another advantage the wood ones have over the Pendlay Elite Jerk Blocks is that you can adjust them to do pulls and lifts from low block heights with them; where as with the Pendlay set you can only do jerks. Instructions for the wood ones are found here: http://www.catalystathletics.com/ 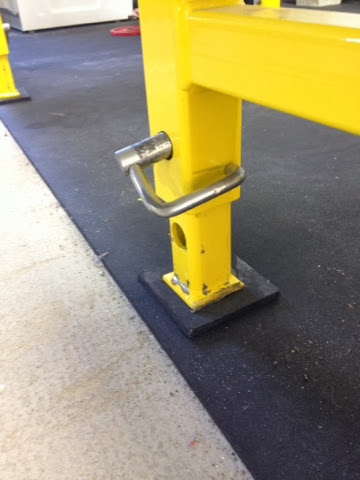 Notice in the above picture you can see the pin dislodged from the previous set. If you need to adjust the height, 1 person needs to hold up the table while the other person adjusts the pin. Here is a video of me jerking 175kg from the Pendlay Jerk Tables. I wish I would have dropped the weight on the table so you can hear the noise. Perhaps next time I use them I will do this. Check out discount weightlifting equipment here.

Posted by Mountain Man at 10:00 AM No comments:

Not suitable for Olympic Weightlifting. 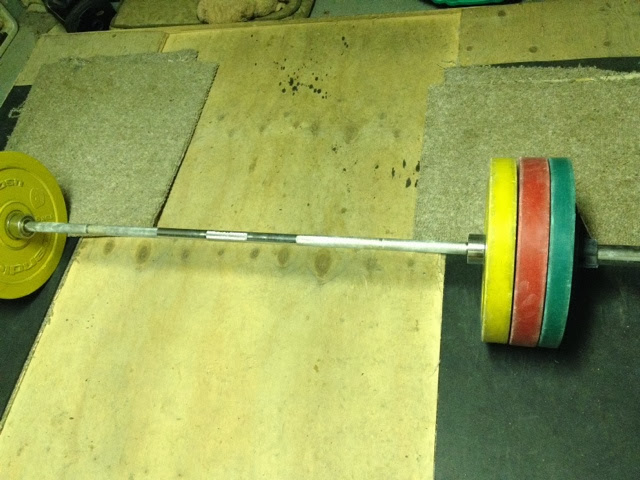 When I got this loaner bar I was impressed at the collar spin and thought the knurling was decent. I didn't think the snatch lines were totally accurate and I thought the shaft was a little thicker than 28mm. I was right, it is 32mm. After one light training session I demolished the bearings so there was no more spin. I guess this bar was not meant to be dropped. http://www.tko.com/products/7-olympic-straight-bar-hard-chrome-812rob-862-c
If you are looking for a budget friendly barbell to start Olympic weightlifting, I would check out Bells of Steel.
Posted by Mountain Man at 12:24 PM No comments: